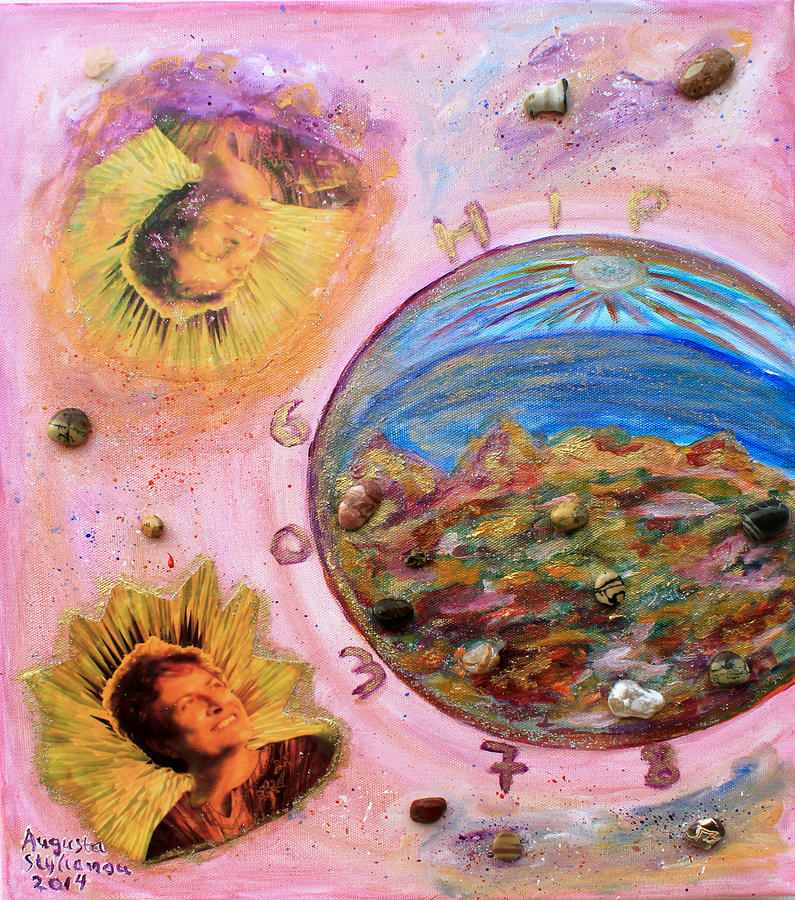 You can order your Birth Star Painting according to astronomical cataloque.

This is an artistic interpretation of my birth Star HIP 60378 (Hipparchus Catalogue), 526.06 light-years from Earth, that according to Astronomical charts was in the Constellation of Virgo and rose in the horizon of Limassol at the hour of birth of the Artist Augusta Stylianou.

You can order your Birth Star Painting according to astronomical cataloque. Your star will be different and according to your time of birth, and it will be so unique as you. The pebbles are from Aphrodite's birth place and they are very beautiful and worldwide unique. The exceptionally beautiful pebbles with the small world on them resemble with Planets and Stars.

Ordering your own Star painting, you will have a Painting so Unique as You.

Thirteen billion years ago, a vacuum fluctuation formed the matter of stars. The stars produced the material of planets, asteroids, stones, pebbles....
Pebbles are indirect products of Stellar Matter that I use in my paintings to show the Universe, Stars, Constellations and Planets.
These pebbles are the expression of the fractal nature of the universe. They are unique and their resemblance is partial in various scales.
They have something self similar that gives an embossed structure in the work and makes it unprecedented and impossible to copy. In each pebble is portrayed a microcosm that constitutes a small part of the entire work making it multidimensional and unique.
The beauty is thus expressed in an infinite variety and complexity

Thousands of years ago, on a beautiful beach of Cyprus, Aphrodite, the goddess of love and beauty was born.
On emerging from the foamy sea, she left behind a part of her beauty at the bottom of the sea. There, it began to form a peculiar and mysterious world within the pebbles found on the sea-bed, which takes you to distant lands high up in the skies where you become acquainted with the original birthplace of the goddess of love.
The grace and the pathos of the sky intermingle with the waves of the sea to create a small world within each pebble of the sea. From then on, the pebbles join with the greater world in harmonious unison.
Likewise a human being is a small world within himself who upon his birth also becomes part of the greater world. It is then, on the time of our birth, that the heavenly bodies form various shapes which make up our identity. A creation, as unique and unrepeatable as is each pebble of the sea.

Look at yourself in a different light and love yourself as a wonderfully special being which in some respect is reflected in the complexity of the universe. Unite with the exceptional beauty of natures creation.

The human being is directly connected with the universe. The microcosm and macrocosm are unison with the connecting space power. The exceptionally beautiful pebbles with the small world on them resemble with Planets and Stars.

Ordering your own Chart, you will have a Painting so Unique as You.